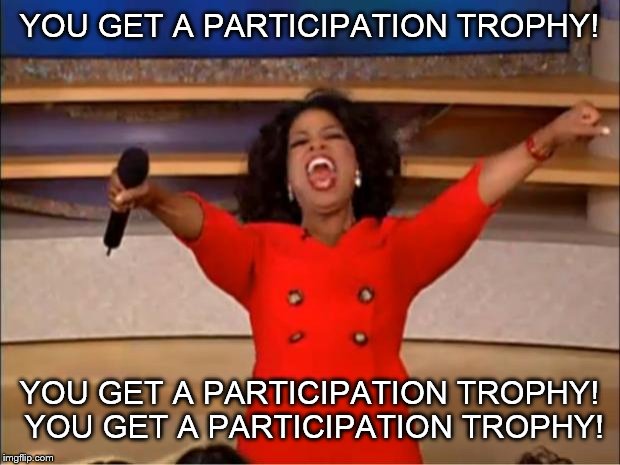 I was scrolling through the Washington Poo (the name I have given to the Washington Post newspaper), and I ran across this article entitled “Here’s how my graduating class ended up with 72 valedictorians: The rise of multiple valedictorians is not a product of the “everyone gets a trophy” era.”  from a guy named Dalton Miller. Mr Miller is about to be a sophomore at Ohio State University (GO BIG BLUE!! CRUSH THE BUCKEYES!!) and he is choosing to major in political science. The title of the article, plus knowing his age, and his chosen major immediately made me think to myself, “This kid has a bright future ahead of him as a Democratic political operative or candidate.”  Check out the first two paragraphs of the article.

Understandably, these numbers confuse a lot of people. How can more than one student earn the highest GPA? How can more than one give the valedictory speech at graduation? Every class can have just one highest achiever, right? Generally, that’s true. But the administrators of Dublin school district, and a growing number of school districts across the country, see things differently. In Dublin, every student earning a GPA above 4.1 is deemed a valedictorian. Traditionalists argue that this system degrades the distinction. Maybe so, but the merits of this approach are far greater. Creating a system that promotes personal achievement over unhealthy competition and that rewards hard-working students without hindering anyone’s ability to succeed should be applauded.

I love how he starts out trying to defend this policy that is clearly based on the Leftist/Regressive/Socialist idea of “Everybody gets a trophy”, by saying in his title, “The rise of multiple valedictorians is not a product of the “everyone gets a trophy” era.” And then he tries to rationalize it later on by saying, “Recognizing multiple valedictorians eliminates the unhealthy competition created by a system that awards just one winner.”

This young man is approximately 19-20 years old. So, he was born around 1995-6, and he is right on the cusp of that “Gen-Y”, “Gen-Next”, “Millennial” generation, and being one of the Gen-Z’ers.. It’s really tragic, because this kid (and virtually everyone in his generation) has been SOOOOOOOOOOOO DEEPLY INDOCTRINATED, that he doesn’t even know…that he doesn’t know!! He doesn’t realize that he has been taught to believe that UP is now DOWN, and DOWN is now UP.

Back in August 2014, I wrote an article entitled, “Redefining Words = Redefining America”, where I said:

So when we see that The Left is actively seeking to redefine words in that manner, it is cause for great consternation by us, because we know that he who controls the language, controls everything in the debate, because they can control the past, the present and the future. If you can redefine words…you can redefine America.

Did you notice that they all made it clear it was the student?!?! The very definition of “Valedictorian” is singular!! I feel sorry for these Millennials, because they really are woefully unprepared for adulthood. Maybe we need to have them go back and watch old episodes of THE HIGHLANDER, because they need to understand that when it comes to things like being a champion, or the Valedictorian…THERE CAN BE ONLY ONE!!