Jesse Owens did more to combat racism than any modern “protester”. 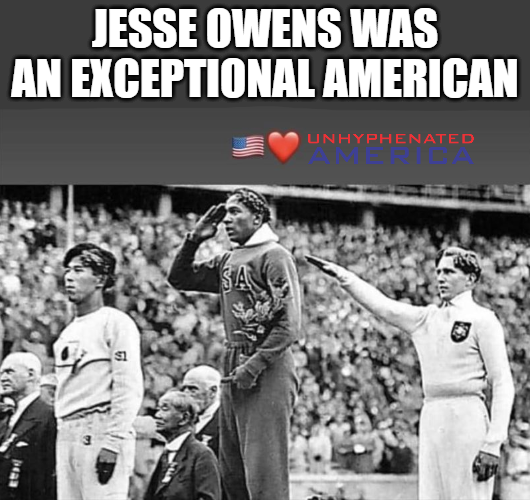 This is 4-time Olympic gold medalist Jesse Owens (1913-1980) on the medal stand at the 1936 Olympic Games in Berlin, in the heart of National SOCIALIST German Workers Party (NAZI) controlled Germany.

Between August 3rd and August 9th, 1936, he won the gold medal in the 100 meters, long jump, 200 meters, and 4×100-meter relay. He was hands-down, the most successful athlete at the Games and, as an American Black man, was credited with “single-handedly crushing Hitler’s myth of Aryan supremacy”. He shocked the world, he changed the way the world viewed Black people, and he did it while wrapping himself in Old Glory.

In 2021, we have people who have never known anything remotely resembling the type of racism that Jesse Owens experienced in 1936. However, he not only endured and fought through it, but he proudly represented the United States of America on the world stage. Jesse Owens did not go to the Olympics as an angry “African-American”, he went as an American Black man, who was humbled to have the opportunity to represent his country.

In 1936, America still had not come close to making good on the “promissory note” that Reverend Martin Luther King Jr. spoke of in his famous 1963 “I Have A Dream” speech when he said:

“One hundred years later, the Negro is still languishing in the corners of American society and finds himself an exile in his own land. So we have come here today to dramatize an appalling condition.

In a sense we have come to our nation’s capital to cash a check. When the architects of our republic wrote the magnificent words of the Constitution and the declaration of Independence, they were signing a promissory note to which every American was to fall heir. This note was a promise that all men would be guaranteed the inalienable rights of life, liberty, and the pursuit of happiness.

It is obvious today that America has defaulted on this promissory note insofar as her citizens of color are concerned. Instead of honoring this sacred obligation, America has given the Negro people a bad check which has come back marked “insufficient funds.” But we refuse to believe that the bank of justice is bankrupt. We refuse to believe that there are insufficient funds in the great vaults of opportunity of this nation. So we have come to cash this check — a check that will give us upon demand the riches of freedom and the security of justice.“

With the performance and conduct of Jesse Owen and the speech of MLK in mind, I have one simple question for you. Do you believe that America is more racist in 2021, or less racist in 2021, than it was in 1963, let alone 1936?

Just like anything else, what you nurture, make a priority, and put to the forefront of your mind is what grows. Jesse Owens made being the world’s best sprinter and long-jumper his priority, and by doing so, he changed the world for the better, and will be remembered throughout history. Most of these modern so-called “activist athletes”, like ol’ what’s-her-name, will find that they will quickly fade from memory…as they should, because nothing they are doing is helping to change the world for the better.