Harriet Tubman on the $20? Look…SQUIRREL!!

As soon as I heard President Obama’s Treasury Secretary, Jacob “Jack” Lew, announce that Harriet Tubman was going to be the new face on the Federal Reserve Note with a reported value of $20, my first thought was, Look…SQUIRREL!! 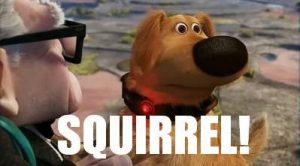 If you saw the 2009 hit animated movie, “UP”, from Pixar Studios, you will recognize the dog in the picture is named “Dug”. Dug is a “plus-sized” golden retriever who belongs to Charles Muntz. Dug is able to speak English via a special collar, invented by Charles, that translates his thoughts into speech. Dug is a fun loving dog, who is easily distracted by things like…SQUIRRELS!!
What does any of that have to do with the anti-slavery icon, Harriet Tubman, being posthumously honored with her image gracing one of the most highly circulated units of our currency? Well, it’s because this is nothing more than something meant to distract those that are easily distracted.
Blacks on the Left, as well as the Right, who are open and honest, are all acknowledging the undeniable truth that…Blacks in general have done much worse under the Obama administration than we did under the previous administration. I mean, who would have thought that, at least in terms of our wallets/pocketbooks, Black folks would want to return to the Bush years?
Pseudo-moderate (but actually Leftist) radio and tv commentator, Tavis Smiley, told Megyn Kelly of Fox News that, “On every leading economic issue, in the leading economic issues Black Americans have lost ground in every one of those leading categories. So in the last ten years it hasn’t been good for black folk.”
In a July 2015 article in Townhall.com, Conservative commentator, Larry Elder, mentioned that in exchange for giving 95 percent of their vote to President Obama, the poverty rate for Blacks increased from 25.8 percent, to 27.2 percent. The whipped creme on the top of the economic turd sundae served up by the Obama administration is that, while median household income for Whites fell by only 1 percent, for minority households (which usually is primarily referring to Blacks, and sometimes Hispanics), that median household income fell by 9 percent. Yep, it was nine times worse for “minorities” under the first “minority” President. The cherry on top is the sad fact that the “wealth gap” between White households and Black households grew from being seven times greater, to eight times greater.
Being a student of history, there are two other things that came to my mind when I heard about the impending change on the face of the $20 bill. In his best-selling book, “In the President’s Secret Service: Behind the Scenes with Agents in the Line of Fire and the Presidents They Protect”, Ronald Kessler reports that Democrat President Lyndon “Big Daddy Pimpin’” Johnson once said “These Negroes, they’re getting pretty uppity these days and that’s a problem for us since they’ve got something now they never had before, the political pull to back up their uppityness. Now we’ve got to do something about this, we’ve got to give them a little something, just enough to quiet them down, not enough to make a difference. For if we don’t move at all, then their allies will line up against us and there’ll be no way of stopping them, we’ll lose the filibuster and there’ll be no way of putting a brake on all sorts of wild legislation. It’ll be Reconstruction all over again.”
Look…SQUIRREL!!
Folks, this is nothing new. It’s not like everything has been going hunky-dory, and then all of a sudden in the last couple of months things went downhill for the Black Community. Back in September of 2011, after 971 days (2 years, 7 months, and 29 days) of the Obama administration, [713 days (which is 1 year, 11 months, and 14 days) of it with Democrats controlling the White House, the U.S. Senate, and the U.S. House of Representatives], the Chairman of the Congressional Black Caucus, Emanuel Cleaver, remarked on the sad state of the economic affairs for Blacks in America. In comments to the Miami Herald, he said, “If [former President] Bill Clinton had been in the White House and had failed to address this problem, we probably would be marching on the White House. There is a less-volatile reaction in the CBC because nobody wants to do anything that would empower the people who hate the president.”
See, I have to once again reference my hero, Booker T. Washington (1856-1915), who said, “At the bottom of education, at the bottom of politics, even at the bottom of religion, there must be for our race economic independence.” No offense to Harriet Tubman, because she was an extraordinary person, and she is not honored nearly enough,…but if there was any one American Black person who really should have their face put on one of the most visible Federal Reserve Notes in American currency, it’s Booker T. Washington. Not only did he help to lift THOUSANDS of Black folks “Up From Slavery”, and not only do he take extraordinary steps to help heal the wounds of racial strife, but he an was unapologetic proponent of Free Enterprise and Capitalism. He knew that not only does Free Enterprise and Capitalism help to make America Great, but it was the only way the Americans who were previously slaves could begin to become self-sufficient and really help to grow the economy.
But look folks, even though I’m a huge fan of Booker T. Washington, if the Obama administration were to have announced that they were putting his face on the $20 Federal Reserve Note, instead of Harriet Tubman, it wouldn’t change the economics facts. After 2,653 days (which is 7 years, 3 months, and 6 days) with Obama being the Chief Executive Officer of the $3.9 Trillion U.S. Federal Government, which has regulatory power and influence over our $17 Trillion U.S. economy, the number of Black folks who cannot survive without the government has increased to 1 out of every 4 people.
Like “Big Daddy Pimpin’” said back in the 1960’s, “Now we’ve got to do something about this, we’ve got to give them a little something, just enough to quiet them down, not enough to make a difference.”  Hey, I’ve got an idea, lets slap a picture of a Black lady on a Federal Reserve Note to distract them and make them feel like they’ve gained something!!
Look…SQUIRREL!!