All Trevor wants, is to be Army Strong. 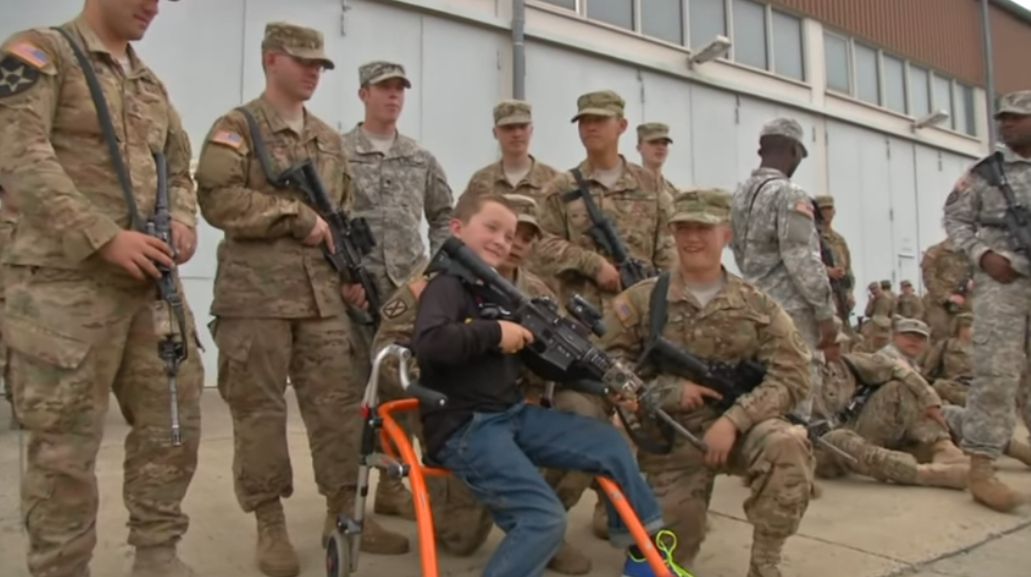 Virtually all of my memories of growing up as a Military (Air Force) Brat in Germany during the 1980’s are fond memories. For me and my childhood buddies, there really wasn’t much else we ever seriously considered doing, other than serving in the military. For us, the coolest, most manly, and the most honorable and worthwhile thing that a man could with his life, was to serve our country.

Unfortunately, due to medical circumstances beyond my control, I personally was never able to fulfill that boyhood dream. So, you can imagine how big of lump I got in my throat when I first heard about Trevor Pedersen. This courageous young man was diagnosed with Fahr’s Syndrome, a very rare neurological disorder, which has similar traits and symptoms as Parkinson’s disease. It usually strikes adults in their 40’s or 50’s, but as in Trevor’s case, it does occasionally occur during childhood or adolescence.

One of the things that I love so much about this country, and why I haven’t given up hope for us, and still believe in American Exceptionalism, is when I hear stories about what Americans are willing to do for their fellow man.

There’s a book I like to read, and there is a section where the author, a Greek physician named Luke, detailed the words of a great Apostle by the name of Paul, from Tarsus (modern Turkey). In this book of Acts, chapter 20, verse 35 (NKJV), Paul is quoted as saying, “I have shown you in every way, by laboring like this, that you must support the weak. And remember the words of the Lord Jesus, that He said, ‘It is more blessed to give than to receive.’”

With that in mind, it came as absolutely no surprise to me when I heard that for his 8th birthday, Trevor’s uncle, 1st Lt. Erik Pedersen (USA) of 1st Squadron, 2nd Cavalry Regiment, arranged for Trevor and his father Jason to travel to Vilseck, Germany, and join his Squadron on their Spur Ride.

Fahr’s Syndrome is a degenerative illness that greatly diminishes a persons motor skills, and will eventually rob Trevor of the ability to move on his own, hence the need for a walker. You can imagine that for a young boy, suffering with this disease, trying to keep up with a bunch of soldiers who are in peak physical condition is challenging to say the least. But inside of this courageous little boy beats the heart of a soldier. When I watched this video of his time with those American Soldiers, and saw Trevor’s courage, and gratefulness, I was reminded of the words of the Apostle Paul, in Philippians 4:10-13 (NKJV), when he spoke about the generosity of the Philippians towards he and his protégé, Timothy. He said, “10 But I rejoiced in the Lord greatly that now at last your care for me has flourished again; though you surely did care, but you lacked opportunity. 11 Not that I speak in regard to need, for I have learned in whatever state I am, to be content: 12 I know how to be abased, and I know how to abound. Everywhere and in all things I have learned both to be full and to be hungry, both to abound and to suffer need. 13 I can do all things through Christ[a] who strengthens me.”

Although it got tough towards the end, and his body grew weak, Trevor soldiered on, finished the task, and earned the coveted Silver Spurs worn by distinguished Cavalry Soldiers. I salute you Trevor.