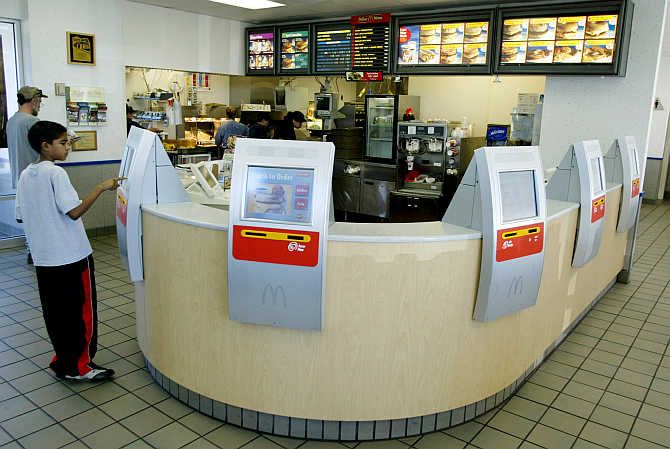 One of my all-time favorite movies is the 1988 classic comedy, “COMING TO AMERICA”, starring Eddie Murphy and Arsenio Hall. Like many other folks, I can pretty much quote virtually every line in the whole movie. The way my mind works, is that I often find myself immediately relating news that I hear to music, movies, or past experiences and observations. So when I saw on the White House Facebook page that President Obama had invited a 36 year old Fast Food Worker, Terrence Wise, to the White House to speak about Minimum-Wage Laws, I immediately thought of a scene from “COMING TO AMERICA”. 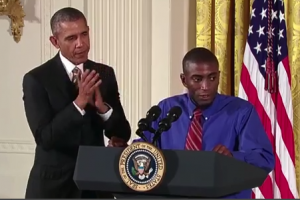 The White House
October 8 at 4:06pm ·
Terrence Wise is a 36-year-old, 2nd-generation fast-food worker. He’s been in the industry for nearly two decades and works two jobs. He makes only $8 per hour. His fiancé is a home health care worker. She’s been in the industry for 12 years. She makes just $10 per hour.
Watch Terrence tell his story about why he’s fighting for a better, fairer workplace.

In the scene from “COMING TO AMERICA”,  his royal highness, Prince Akeem (Murphy) and his sidekick Semmi (Hall) are in the kitchen of McDowell’s restaurant, sweeping and mopping floors, when they have an encounter with the very ambitious Maurice, played by comedian Louie Anderson. 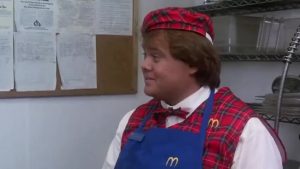 “Hiiiii. You know, I started on clean-up, just like you guys. And now..see, I’m washing lettuce. Soon I’ll be on fries. Then the grill. A year or two, I make Assistant Manager…and that’s where the big bucks start rolling in!!

You know, I remember back in the early 1990’s when I was trying to catch-up on bills, so I decided to get a part-time job (in addition to my full-time employment) somewhere in the Fast Food Industry where I could work nights and weekends. I remember I walked into the local Pizza Hut nearby, and asked if they were hiring. The lady at the front referred me to the Assistant Manager. He walked over, looked me up and down, and said, “You’re hired”. You see, my parents taught me that I should always wear at least a shirt and tie when I am applying for a job, so I did just that when I was going around town looking to fill out job applications.

Like many people, I only worked in the Fast Food Industry for a brief period. I was only there 5-6 months before I got caught up on my bills, and no longer needed (or wanted) to continue working there. It was a Minimum Wage job (I believe that was around $5/hr back then), and I had no desire to continue working there any longer than I felt was needed. This was primarily because I knew that I had the knowledge, skills, and abilities to go out and earn more money elsewhere, without coming home on a Friday night, and having my dog go crazy sniffing me, because I smelled like pizza. This particular Pizza Hut was a dine-in and carry-out restaurant, and at that time, it was the second busiest Pizza Hut in the entire state. I closed every Friday night that I worked, so I usually arrived around 6pm, and didn’t  finish doing food prep for the next day, and cleaning up the kitchen until around 1-2am every Friday night. Friday nights were brutal. We usually had to change the ticket tape at least once or twice during my shift, because apparently Friday night is “Pizza Night” in Colorado, and it seemed like the orders would never stop coming in.

I remember meeting some very nice people while I was there, and several of them had been working there for years already. The interesting thing was that some of them were slightly resentful that I ended up being offered (and turning down) a Shift Lead position after only about a month or two on the job. The manager made it clear that I was being offered this promotion because of the fact that I always showed up to work on-time (or early), I always volunteered to do extra work if necessary, and I always had a good attitude. Once again, it surely didn’t hurt that I showed up on day one with a shirt and tie.

I was only 21-22 years old back when I worked at Pizza Hut. So, when I started thinking about President Obama’s guest at the White House, Mr. Wise, I couldn’t help but to wonder…how is it that you’re 36 years old, have been working in the Fast Food Industry for two decades…and you are still only making $8/hr? Listen, folks, I will never begrudge a person who is willing to put in “an honest day’s work, for an honest day’s pay.”  My Bible tells me that work is a good thing. In fact, my Bible tells me in Genesis 2:15 (NKJV) that almost immediately after God created man (Adam), he gave him work to do. It says, “Then the Lord God took the man and put him in the garden of Eden to tend (work) and keep it.”  So understand that I at least respect the fact that Mr. Wise has managed to keep a job for 20 years. This fits right in with what famed economist, Walter E. Williams, said that any individual in America, regardless of race, could do to virtually guarantee that they will avoid living in poverty. He said that one must:

Dr. Williams found that the percentage of individuals (regardless of ethnicity) who did all five of those things, and still were living in poverty for any period of time, was in the single-digits. The current poverty threshold for two adults and two children in the U.S. is $23,624. If you have two adults, both making $8/hr, both working 40 hours per week, 50 weeks per year (assuming they take time off), that means an annual household income of $32,000.

Something else that stood out from the talk that Mr. Wise gave at the White House where he was advocating for higher wages, and Unionization of Fast Food Workers, was when he mentioned that he was a 2nd Generation Fast Food Worker. You know, when I thought about that, it reminded me of another thing from Pop Culture. If you’re at least 30 years old, and used to watch the Black Entertainment Television (B.E.T.) network back in the early 1990s, you will probably remember “Calvin”, from the McDonald’s commercials. There were three ads that ran between 1990-1992. 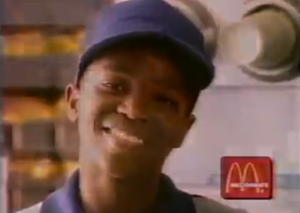 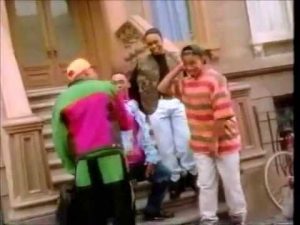 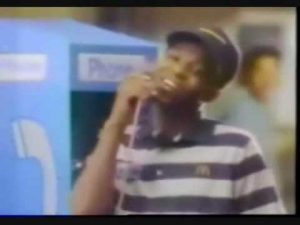 They show a young “Calvin”, transitioning from an average young Black Man in America, to a member of the “Management Team”, alluding to his desire and plan to eventually own his own McDonald’s franchise one day. 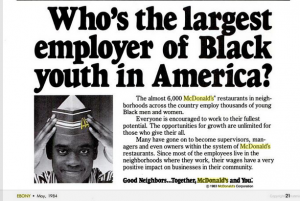 Once again, with all due respect to Mr. Wise, Fast Food Industry jobs, particularly those that only pay $8/hr are not, and have never been, intended to be full-time jobs for 36-year-old married men with children. Those types of jobs pay a “Minimum Wage” because they only require a minimum level of knowledge, skills, and abilities to do the job. And usually, people with those “minimums” are in the teens, or maybe their early 20’s, not in their mid-30’s.

I actually feel sorry for Mr. Wise, because I was raised in a household where my parents expected me to not just follow in their footsteps, but to stand on their shoulders so that I could see further, and hopefully do more, and be more than they were able to. The really unfortunate thing is that Mr. Wise is being played as a pawn in a game by the Left in general, and this President in particular. This President doesn’t really care about Terrence Wise, his family, or their future.  As far as he is concerned, he wouldn’t care if Mr. Wise’s children end up being the 3rd generation to spend their lives working in “Minimum Wage” jobs in the Fast Food Industry. All this President cares about is being able to use people like Mr. Wise as a means to continue to gain and consolidate political power.

If I had a chance to meet Mr. Wise, I would tell him that he can and should become more than just an $8/hr Fast Food Worker and that the key was in simply changing the way he thinks. I would hand him a copy of “Up From Slavery” by THAT DUDE, Booker T. Washington, encourage him to read it, and give me a call afterward. But if he doesn’t like to read, I would simply tell him to take a lesson from “Calvin”, because if “Calvin” was able to join the management team within 2 years, there is no reason why he can’t do it also. Finally, I would give him a cautionary warning, and some words of wisdom that President Obama would never share with him. If he doesn’t stop demanding more money for the exact same work, and focus on developing some additional knowledge, skills, and abilities that are of greater value to the labor market; instead of seeing him when they walk in, customers will walk in and see this shiny box that says…Welcome to McDonald’s. May I take your order, please. 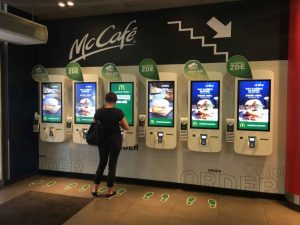