It would be easier to hate those “greedy capitalist” if they weren’t making my life better. 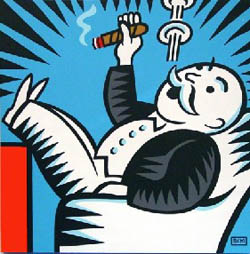 I have a confession to make. I love “greedy capitalist”. There, I said it. I’m “out of the closet” with it. I feel so much more free now that I no longer have to hide my true self.

One of the things I love about “greedy capitalist” is that they are always sitting around plotting and scheming to find ways to get my money…in exchange for improving my life. Ok, well, they may not be thinking specifically about me. In fact, I’m sure that they don’t even care about me in particular. They care about themselves, and their families. And truth be told, I don’t necessarily care about them, because I’m busy caring about myself and my family. But why does it matter if either one of us “cares” specifically about each other, as long as we both benefit from the exchange?

Noted economists, Walter E. Williams (1936-2020), who I affectionately and respectfully refer to as #ThatDude, said it best when he said, “Capitalism is relatively new in human history. Prior to capitalism, the way people amassed great wealth was by looting, plundering and enslaving their fellow man. Capitalism made it possible to become wealthy by serving your fellow man.”

Let me give you an example. I must admit, I’m a gadget guy. I’m the guy who will see a late-night infomercial (I’m a night owl) for a product and say, “Hmmmmmmmmm!!!!” I have never purchased something right then and there, but I have frequently done research on those products to decide whether they will really add value to my life.

I am glad that John Sylvan invented the Keurig “K-Cup” in the 1990’s, even though he has stated that he now regrets it, because he has become an #EnviroNotsee. Keurig Green Mountain’s annual revenues have climbed to almost $5 billion, up more than five-fold in five years, largely on the back of selling billions of K-Cups every year.

Unfortunately for him, Sylvan left the company in 1997, and sold his ownership of the product for $50,000. It’s his loss, because I use my Keurig daily. However, I have started using the pods from “Chock full o’ Nuts” brand, because I like their coffee, and, as they say, “Our pods have no hard plastic shell. That means 35% less plastic than ordinary pods. And if the world needs less of anything, it’s plastic waste.” If John Sylvan had stayed with the company, he could have been the one to improve the product and get very rich.

I’m glad that Fred van der Weij and his company, APDS, invented the technology for the “air fryer” in the early 2000’s. As many people say, “air frying” uses the same principles as “convection” ovens, but produces those results about 25% faster than a regular convection oven. I hope Mr. van der Weij becomes a freaking billionaire, because my wife and I use our “air fryer” daily, and it is truly a time saver…and time is money!

For years before that, I faithfully used my George Foreman Grill, and I’m glad that he was paid $138 Million for the rights to use his name on the grill in perpetuity. I’m also glad that between the monthly royalties and the buy-out, George personally pocketed a minimum of $250 million from the grill.

I’m glad that Ron Popeil built a $200 Million net worth and that his phrase “Set it and forget it” became part of the lexicon, because my wife and I own a Ronco Showtime Rotisserie, and it has added value to our lives.

I’m glad that William Grover Barnard invented the Vitamix blender. My wife and I use it daily.

I’m glad that George Gilbey invented the SodaStream, 115 years ago. My wife and I use ours daily.

The list goes on and on, but the point is, most of the people who decry the failures and imperfections of “capitalism” are often doing so…while utilizing the products born of “greedy capitalist”. Their glaring lack of self-awareness would be hilarious to people like me, if it wasn’t so disturbing, dangerous and destructive.